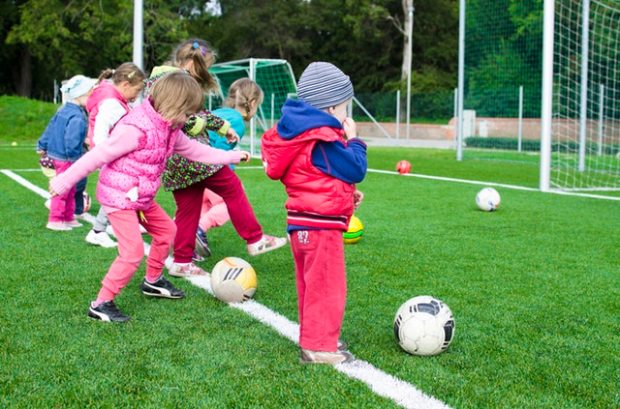 They lure you into a false sense of control.

A dozen little girls, all pig-tailed and perfect, cautiously step onto the soccer field gazing at you with doe eyes. You can practically hear the grass fold underneath their cleated toes.

You show them the soccer goal, kick a soccer ball into it, and tweet the whistle offering them an opportunity to try it for themselves.

They approach, trying not to step on any one blade of grass, with eyes cast away and hands folded in front of them.

They reluctantly swing their foot in the general direction of the ball.

Many make contact, and a few even knock the ball forward in the general direction of the goal.

Some check on the ball’s welfare after plunking it.

“Please may I have a sip of water, Mr. Coach, please, sir?” is all you hear from them.

All is well. Life is a beautiful game.

Six weeks later, you’re pulling two of them off your ankles as you attempt to run through a set of pylons to demonstrate a drill.

While scooting through the cones, you tell McKenzie to stop throwing grass, Madison to unzip her hoodie from around her eyes so she can see, your own daughter to stop smacking you in the butt, and Mackaleigh to stop dipping her shoulder into her teammate’s chest to win the ball (although secretly you admire every last second of her pure aggression to dominate and dream of her thanking you for helping her win a World Cup for Canada 16 years from now).

Welcome to coaching Kids Soccer 1-Oh-No-1: How to Survive Your First Season.

There was no guide for me when I began coaching my neighbourhood under-six girls’ team last year, and that’s why I’m writing this now.

What you’ll find below is pure and utter nonsense, because you can’t expect me to really be helping you, can you?

I had to suffer through it, and you do, too. Ha!

Besides, there’s no way to predict the behaviours of the average five-year-old child, so any advice I offer is probably going to be useless this season.

Heck, any advice I give would be useless to ME one week after writing it.

Kids change quickly after all (unless you need them to change quickly, then they doddle searching for socks that don’t hurt their feet).

Here’s what I can tell you, though, for what it’s worth:

Invest in a whistle

Don’t buy one of those dollar-store whistles with a cheap block of cork in the centre. The cork thingy never works well and unless you have the perfect lungs, you end up sounding like a 13-year-old boy hitting puberty at just the wrong time.

I’m sure it’s cork taken from wine bottles moms and dads everywhere have opened as they cry themselves to sleep every night after soccer practice.

You can hear the sadness every time you try to whistle it.

Buy a whistle from Canadian Tire that has an NBA logo on the package.

Those things can blister paint.

If all else fails, blow it three times and I’ll come running and pull you out from underneath a pile of squirming children.

Get a watch with a timer

Having easy access to how much time has elapsed allows you to marshall playing time between each of you kids, down to the second.

It’s not the parents you have to worry about when you’re first starting out (more on that some other time), it’s for the kids who are immediately and suddenly struck with stomach cramps the second they step onto the field.

“But the game hasn’t started yet.”

“You can be the first sub. You have exactly two minutes, 35 seconds on my mark!”

This darling exchange will repeat itself for … oh, I dunno, like, 11 years?

Have one extra for every player on the team (see above).

Get a good manager

The team manager is probably the most important person in your life during soccer season.

Generally, look for people who love to organize their kitchen Tupperware at a moment’s notice.

Teachers, nurses, and chambermaids (the ones who can fold towels into swans, hearts, or replicas of the Eiffel Tower) are great places to start.

Look for zen in your manager.

Ask your parents about bonsai trees, and the first person to squeal with delight and produce a pair of pinking shears just big enough for Barbie is your ideal candidate.

Sliced oranges at halftime are still a thing.

I’d half expected that trend to have died off since I was a kid.

Boy, was I wrong. If you’ve ever wondered what pirannha look like underwater as they devour a side of beef, throw a bucket of sliced oranges between a U6 soccer team.

There’s orange juice flying everywhere (get goggles while you’re at Canadian Tire), faces are covered in pulp, and the sound. You can’t unhear that sound.

The most common injury at this stage of soccer is children biting their own fingers at halftime.

Don’t pat them on the head when they’re eating. Some kids are just not socialized at this age.

Don’t teach them anything

Seriously, the only goal you have is bringing them back next season.

Dance with them, play games, and tell them jokes.

There’s nothing you can teach them at age six that will make any greater difference than “soccer is where I go to have fun.”

If,occasionally, your team kicks the soccer ball into the OTHER team’s net at any point during the season, you’ve succeeded.